If you look carefully at the dates you can trace the two missing generations. Some of the names aren’t important, some will give you a sense as to how close the two branches of the family remained and how their differences developed

Artevalos (which actually means ruler returned) Fought at the Battle of Teutoberg in the fall of 9 CE. His return journey was fraught with difficulties and he made it home by relying on the strength and bravery of his horse and the advice of the Battle ravens.

Therefore one son was named to honor his horse and the other in thanks to the ravens who guided him.

One branch of the family is dark haired from Dumnabarra the Kelticos and the other fair, descended from Uberomara one of the Heruli (an ancient Dane)

The dark branch gave rise to famous blacksmiths the fair were well known for their healing skills.

Because of the winnowing of the population it becomes obvious why the women had to look elsewhere for their baby daddies! 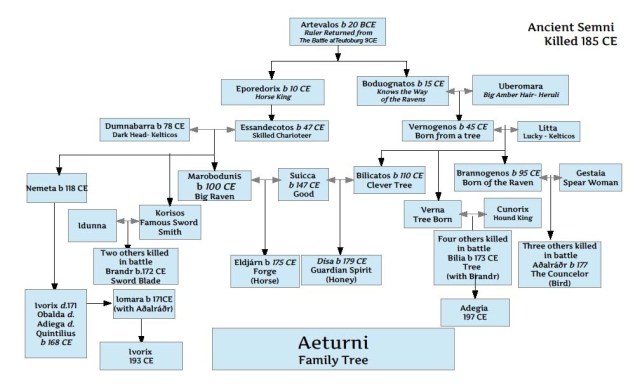 The World of Parallex